Winter in the Vineyard

Our local vineyards which were laden with ripe fruit in late September and covered in vivid yellow-gold leaves in November are now in their dormant phase.  When you look at the vineyards, it looks like there is nothing going on.  The grapes have been picked or dropped.  The leaves have blown away in the December storms.  Cover crops have been planted between the rows.  The grapevine trunks look mangled and tired.  We are in a lull.  But this will soon change.  While the grapevines hunker down for winter, the growers are making plans to start pruning the vines later this month. 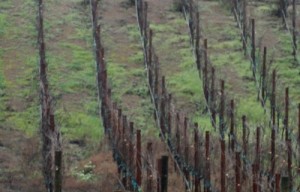 According to Villa del Monte Winemaker John Overstreet, “Pruning is the art of removing anything left over from last year’s harvest and preparing the plants for this year’s harvest.”  Pruning allows the grower to determine where growth will occur and to control the amount of crop for the year.  This means that a grower can pretty accurately predict the yield before fruit even forms!

At the Regan Vineyards where our Chardonnay and Pinot are grown, the long dormant canes are pruned back to shorter spurs with two buds per spur.  The other canes are removed, and, if all goes well, new shoots will sprout from the buds in spring.

Depending on weather, pruning usually starts in late January and needs to be completed before bud-break, when new shoots emerge from the previously dormant buds.

While Villa del Monte does not have its own vineyards, our winemakers are continually in contact with the growers to get progress reports.  “We are pleased to work with a handful of local growers who understand the importance of proper pruning and limiting crop yields in order to ensure the grapes are flavorful and fully ripened,” explains winemaker Neil Perrelli.

We’ll be open for wine tasting on January 26 and 27. Come by and we can talk about grapevines, pruning methods, or try to solve the world’s problems—we’re pretty flexible!