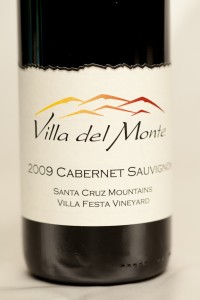 The 2009 Cabernet Sauvignon Santa Cruz Mountains Villa Festa Vineyard is truly a Santa Cruz Mountains wine, as it is produced from 100% Cabernet grapes grown on a small vineyard that we manage on Loma Prieta Avenue in the Santa Cruz Mountains.  Black currants, medium tannins, and a beautiful deep red color combine for a full bodied wine that develops and matures on the palate. With 14% alcohol, this wine is delicious now or it can be cellared for later enjoyment.

About the 2011 Monterey Wine Competition

The 2011 Monterey Wine Competition is a large, influential international wine competition. Over 800 wines from nine countries were entered in this year’s contest.  The wines were evaluated by a prestigious panel of more than a dozen wine experts over two days, March 5-6, at Salinas Valley Fairgrounds in King City, CA. Wines were tasted blind with no knowledge of producer or price. For more information, visit http://montereywinecompetition.com/.  Results are posted at http://www.winereviewonline.com/monterey_wine_competition_medal_winners_2011.cfm.

We produce Chardonnay, Pinot Noir, Merlot, Cabernet, Syrah, and Syrah Rosé.  Winemakers John Overstreet and Neil Perrelli work with several well-known local growers to select the best grapes possible each year for our single-varietal, single-vineyard wines.  Our small lots allow us to meticulously control quality, nurturing our wines to perfection at every step in the process.

We are open for tastings by appointment.