Recipes for your own Mardi Gras celebration 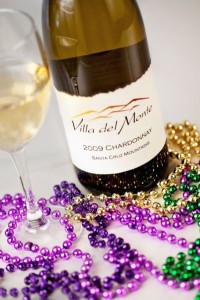 Preheat oven to 450 degrees.  Add flour, baking powder, and salt to a large mixing bowl.  Add baking soda if using buttermilk.  Add shortening, and use fork or hands to lightly mix into flour mixture until small pieces form. Use a very light hand when doing this in order to not over work the dough.  Add milk or buttermilk, and mix just until it forms a ball. Shape biscuit dough with your hands or place dough on lightly floured countertop and use small biscuit cutter for appetizer sized biscuits. Place biscuits on an ungreased baking sheet. Bake at 450 degree for 12 minutes. Split biscuits in half and butter lightly. Place a thin slice of your favorite ham between the halves.

Susan’s Version of Poulet (Chicken) Tchoupitoulas
Plantations were established along the Mississippi River in the 1700’s by French Settlers.  Tchoupitoulas is the last remaining plantation on the West Bank of Jefferson Parish, and the original portion of the house is 220 years old.  This recipe combines a cornbread pudding with seasoned chicken.  Delicious!

Preheat oven to 350 degrees. Grease a baking dish with 1 tablespoon butter. In a large sauté pan, melt remaining 2 tablespoons of butter over medium high heat. Add onions, bell pepper, 1 teaspoon of salt and ¼ teaspoon of cayenne. Season with black pepper and sauté until the onions are soft and start to turn brown. Add sausage and cook for 3 minutes. Add garlic and corn, and cook for 1 minute. Remove from heat and cool.

In a mixing bowl, whisk the eggs, and then add the cream, 1 teaspoon salt, 1/8 teaspoon cayenne pepper, hot sauce and Worcestershire sauce. Whisk until blended. Stir in the sausage mixture. Add the cornbread cubes and mix well. Pour mixture into the prepared baking dish. Sprinkle with grated cheese, and bake until golden brown and set – about 55 minutes.

In a bowl, combine the Essence and ½ cup oil. Mix well and smear evenly over each chicken half. Add enough oil to cover the bottom of a large sauté pan, and heat. Place the chicken in the heated pan, skin side down, and sear until golden brown about 6 to 8 minutes. Turn the chicken over and place in roaster, baking dish or oven-safe sauté pan and roast at 350 degrees for about 25 to 30 minutes until juices run clear.  Let rest for 3-4 minutes.
Serve with cornbread pudding and enjoy!

Combine all ingredients to make 2/3 cup of Essence.

Preheat oven to 400 degrees.  Wash and peel sweet potatoes. Slice into thin rounds. On a large baking sheet layer sweet potatoes evenly. Cover sweet potatoes with a generous amount of olive oil and sprinkle with coarse sea salt. Bake at 400 degrees for about ten minutes, until sweet potatoes start to brown. If they start to get dark, cover lightly with foil and continue to bake until crisp for a total of 20 to 25 minutes.

Whisk together 2 egg yolks and 2 tablespoons of sugar in a bowl until mixture is thick. In a separate bowl, use a whisk or hand mixer to whip the egg whites with 2 tablespoons of sugar until the egg whites hold soft peaks.  Melt the butter on medium heat in a 9-inch nonstick omelet pan or skillet, making sure that the butter does not burn. Combine the yolk mixture with the whipped egg whites, cocoa and melted chocolate.  Pour into the pan and cook until the mixture is firm on the sides, making sure that you do not burn the omelet. Finish cooking the mixture under the broiler until you can tell it is set in the middle, about 2 to 3 minutes. Remove from the oven and fold the omelet over and slip onto a dessert plate. Place a scoop of ice cream next to the omelet and cover with New Orleans Praline Sauce.  Serve while warm.

While growing up in Georgia, Susan Ward Tarner learned to cook from an expert, her “mama.” She now lives in Montana with her husband and teenage daughter where she enjoys combining food history and culture with locally grown and produced ingredients. Susan hopes to inspire everyone to challenge their cooking abilities and palates.